Once there was a woman who traveled to the sacred land of Tuscania.

Along the highway from the bus she watched the hills roll golden against pewter clouds and sky, then the Pouring of Rain down on the windshield. She was sheltered and safe but newly landed, having hardly slept. She was alone but had been greeted, met and taken under the wing, so to speak of the small group of 3 women waiting at the meeting point, as instructed. One British, one American and one with tattoos on her arm.

The pilgrimage was on, although she hadn’t called it such, as yet. Every morning she walked down the road lined with small dark paving stones on her way to the Tower where the SoulCollage(R)  journeyers were, and every evening she walked up the hill back into the town.  In between, although she didn’t know it yet, her pilgrim soul was waiting for her in-between the lines and the cover of her golden notebook. Golden because she chose the yellow covered book over the red or blue. 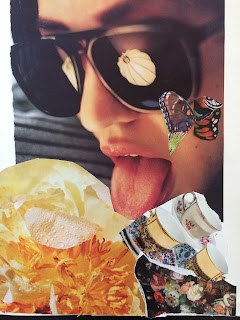 The first days were a flurry of collage, art making and meeting new companions on the road and in the Tower, over tea or cafe latte and breakfast, meals together, twilight suppers, fellow pilgrims and travelers who came to dance, take photographs or write their way home with SoulCollage(R) facilitators.

She knew, one day near the end of the week that something Big was calling her to Home. Homing in, and honing in, on the true nature of her calling – she needed a new relationship with the Self – she had been held hostage, too long, by the critic, naysayer and doubter. She had called on her angels and guides for protection, but in a very ancient church she heard the words  (La Grande Madre) and it sat right with her to pray in the middle of the night for a dream for a signal or a sign. We are here in the sacred land of Tuscania, she thought, as she held her hand to the ancient porous rocks of an Etruscan villa. We are here to hear the memories of the ancestors, but she didn’t feel it yet.

She asked for a sign and received a dream, a solid bull, larger than life, standing in front of the gates of an ancient city; a white horse harnessed, a line of men harnessed to it, pushing the mare into the bull, ramming it again and again and raining sweat blood and tears as she cried. Why can’t you stop? The men were also ramming their bodies and heads into the old walls.

So she sat with the question, in front of the old stone wall the next day, sitting with her back to the verdant landscape. What does the wall say? What does the horse say, what does the bull say, as Mariabruna suggested she ask the dream. 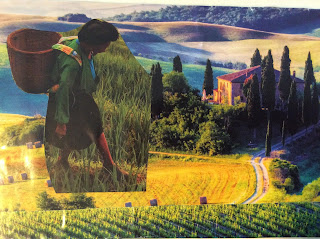 Her pilgrim self had wandered into the waking dream, in between ancient and new, in between past and present, in between her old self who rammed right on through things and people and got things done, to the new, softer around the edges intuitive person waking up, peeling off layers of Strong, Bold, Leader, and Commander to strip away a certain layer of Ego protection and rediscover underneath, the “authentica” or ancient feminine mythical layer, deep in her bones, in her heart and soul, the untethered, unharnessed, fluid, green as the grass bloodline that she felt when she looked out over the valley to the cows grazing below – Oh how soft the trees, Cypress, pine and oak, fig and corn, and vines, such fertile fields and harvests.

This land, sacred land, somehow hers, though not through any heritage or inherited lineage. Is it true to say, mythically connected to the land of the goddesses who came Mare ad Mare – Holy Mary as the guide said, before the Romans, before the Bull, before the conquering tribes and nomads who built the Wall, Under the wall, always down, down in the earth, the voices of the women singing, in long cool tunnels, in warehouses and storage rooms, where oil, wine and grain and sacred objects for ceremony, the baths, clean water, the Flow, in the midst of Stone Walls, a hollow space for the pilgrim to wander, to hear the melody of stillness, embrace the sacred in the sanctuary.

Oh my Soul, pilgrim that thou art, I hear your voice, more clearly here than anywhere. It is not the landscape, that holds it, but the sacred stone walls have echoed my Name, announcing my place in the scheme of things, (as Mary Oliver says), the animal body of my soul, speaks again and again.

So I am happy to be writing (again) and listening for the Voice that speaks. I may forego the old story for a new one, as has been suggested to me by teachers wiser and older than I. I have been very stubborn, the Catholic child in me confesses, not a mea culpa, but an Ave Maria.

Help me Sweet Feminine face of god. Help me listen to my real Voice, my intuitive layer, the strata underneath the wall I have built. Help me even tear down the wall (if this is recommended and necessary). May I allow “not knowing”, and learn to lead by surrender. May I allow allowing and receiving – it is my greatest wish that you write through me. And I will dance to the strings, I will chant and dance and swirl to your musica - in the sacred land of Tuscania, I heard this. 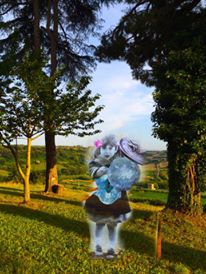 Posted by Creative Soulful Woman at 10:32 AM

On my website you will find info on one-day workshops, seasonal retreats, including creative journaling and SoulCollage(R), and an excerpt from The Tao of Turning Fifty